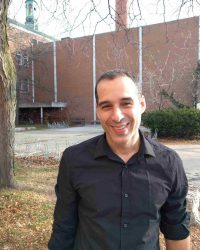 Rony Masri began his teaching career in 1999 with the Greater Essex County District School Board as an occasional teacher for one year. He made the move to the TDSB one year later hired as a Contract Teacher. He has taught Biology, Chemistry, Math, Special Education and an Interdisciplinary Studies Biotechnology program, all at Humberside C.I. Rony was also Assistant Curriculum Leader of the Sciences during his time at Humberside C.I.

Rony became involved with OSSTF as the Professional Development Representative in 2001 and then became Branch President at Humberside CI in 2002. He held that position until December 2017, when he was elected as Executive Officer. Prior to becoming Executive Officer, Rony has served on the Collective Bargaining Committee, was an Executive Officer-at-Large, been a delegate at AMPA for many years and served as an AMPA delegation whip.