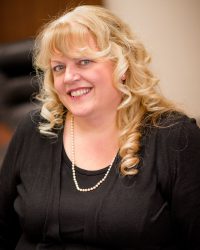 LISA BLACK-MEDDINGS is a History and French teacher who began her teaching career in 1995 at a private school north of Peterborough, ON.  She quickly saw the light and moved to the public education system with the Northumberland-Clarington Board of Education.

Lisa became a contract teacher with the Toronto District School Board in 1999, beginning at Stephen Leacock CI. She soon became involved with OSSTF as a representative to the Collective Bargaining Committee.  Her federation leadership roles grew first as Staff Workload Rep and Branch President at Bathurst Heights, Downsview SS and Albert Campbell CI.

Lisa was first appointed Second Negotiator for the Secondary Teachers of Toronto in the 2008-2012 round of bargaining. She was acclaimed to the position of Executive Officer in April 2009 and May 2010 and re-elected in May 2014 and 2016 and 2020.

Lisa became Chief Negotiator in September 2011 and has experience in negotiations with a difficult employer and is committed to member protection.  She is a strong advocate for the members of OSSTF Toronto and will continue that commitment at the bargaining table.